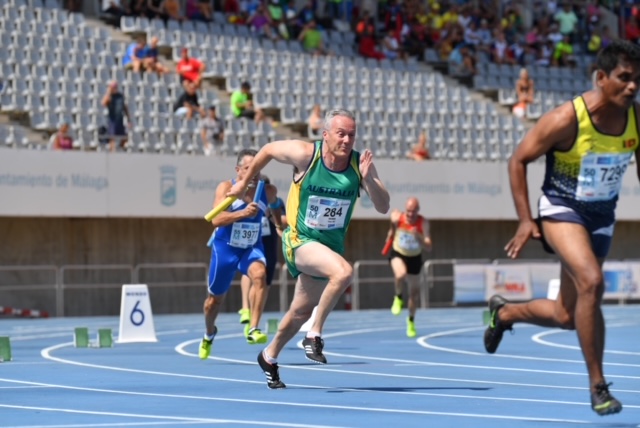 If you have a look at the key official on short track roster 1-you will see a very dedicated individual who has given up his time to assist at UWALAC for over 6 years-this is Greg Brennan. What you may not know is that Greg is an exceptional athlete himself with years of expertise that he passes on each week to our young athletes each week.

It is a family affair at UWA for the Brennan’s with all four of Greg’s sons involved. James is an ex UWALAC athlete and is also one of the chief starters each week.  Lachlan is still with UWALAC and competes in the U15 Boys. Twins, Tom and Sam along with James are all members of UWA Seniors. Tom and Sam were also members of UWALAC until last season.

Here is an excerpt on Greg taken from the Masters Magazine…

Greg started competing in athletics at age 17, joining the Morley Swans Athletics Club; Ray Boyd and John Paini are two high profile Morley Swans alumni. Greg was coached by Ron and Greg Taylor in the late 80s and early 90s and considers they were ‘…way ahead of their contemporaries in my humble opinion.’ He is grateful for the opportunities he had to train with elite athletes such as John Paini, Rob Colling and Russell Mathanda. In 1987 Greg finished third in both the State U20 100m and 200m and had great success as a member of numerous relay teams. He was a member of the Morley Swans U20 4 x 200m relay team that broke the state record twice.

Greg also ran in the Stawell Gift in 1989, ‘90 and ‘91 but athletics took a backseat when he married and his accounting career became a priority. Greg says he missed competing and after seriously contemplating a return for about 5 years he took the plunge and joined Masters in 2011.

A long history of participation in championships in Australia and abroad stands out on Greg’s Masters resume – three Oceania Games, two World Outdoors, one World Indoors, one Pan Pacs and seven Nationals. He has won three individual medals at Oceania Games but considers his Masters highlights to be in relay teams, in particular breaking the M45 State 4 x 100m record at the 2019 Melbourne Nationals with teammates Colin Smith, Lee Stergiou and Adrian McKenzie. He was also a member of the Australian M50 4 x 100m relay team placing fifth in the 2018 World Championships in Spain.

The 100m is Greg Brennan’s favourite sprint, however as the father of four sons who are all up-and-coming athletes, he is finding his ranking is slipping a little; right now he is third in the family over 100m!

‘One of my most treasured moments was to be able to compete against my eldest son James in the 100m at Strive. He beat me and it signalled a changing of the Athletics guard in my family”

We are very lucky to have Greg at UWA along with his boys and thank Greg for his service to our centre and the sport of athletics.